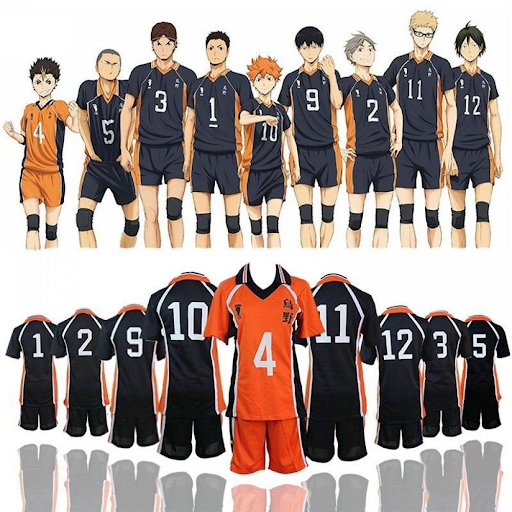 Like other Japanese schools, Karasuno has a dress code that requires students to wear a uniform. The classic black gakuran, white collared shirt, cream jacket, and black trousers make up the male uniform. The women’s uniform consists of a white blouse with a red belt, a cream jumper, a black blazer, and a grey skirt. However, it is believed that the dress code is not strictly followed since often students are seen without the cream sweater and wearing t-shirts instead of collared shirts.

A black tracksuit with white detailing is worn by the boys’ volleyball team. During practice matches, the players wear white t-shirts and black trousers, with a yellow sports bib on top. The majority of players wear a black uniform with orange specifics during official matches. The libero wears an orange jersey with black detailing that contrasts with the rest of the team.

A black shirt and shorts with white detailing make up the girls’ volleyball club outfit. White is used for the shoulder area and piping, as well as the prominently displayed team name on the front. The uniform’s body and side stripes are black, with thin white triangles on the backs highlighting the outline of the shoulders. The libero wears a white jersey with black detailing that contrasts with the rest of the team. 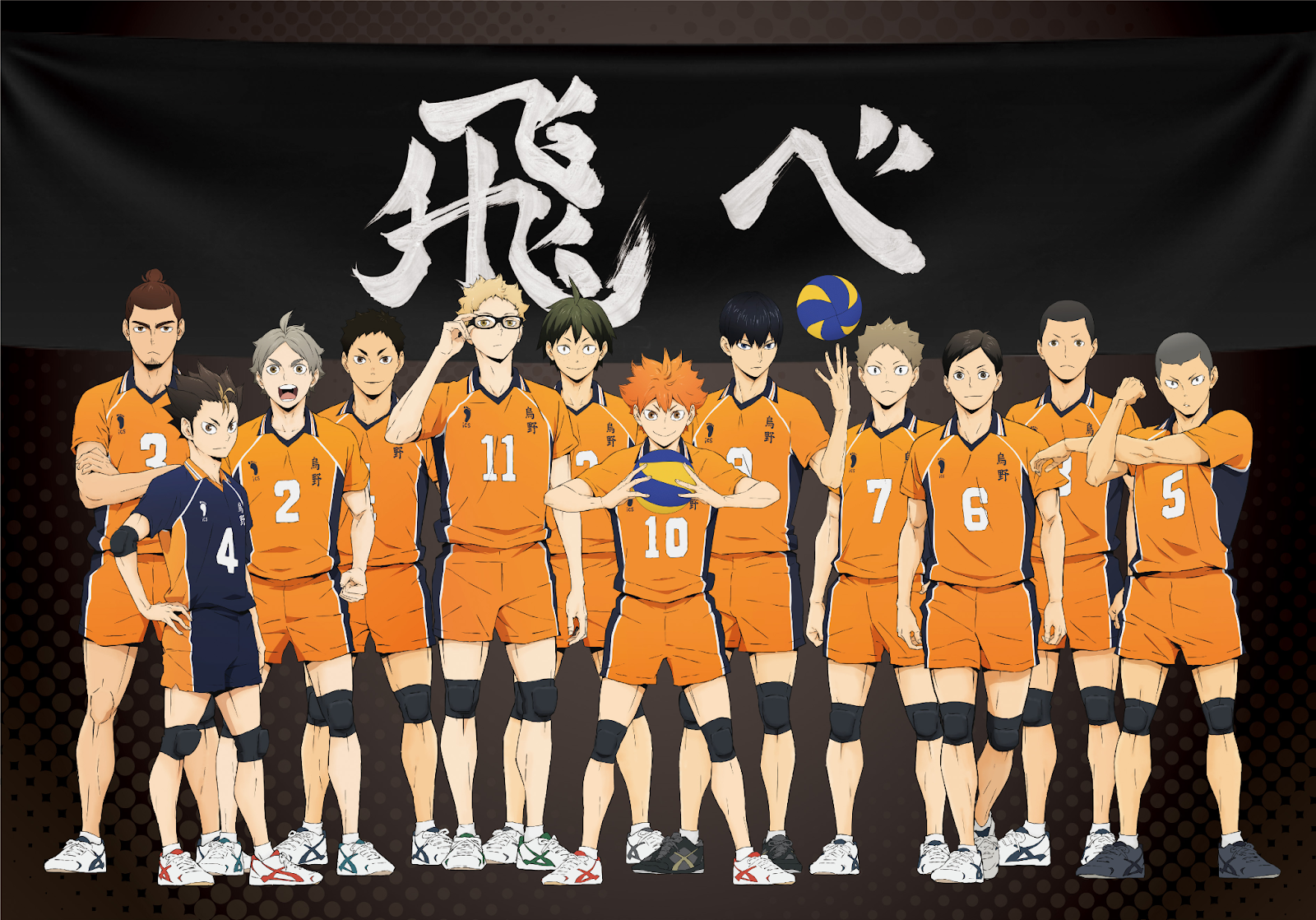 There are five classes in each school, with classes 4 and 5 being college preparatory. Each period lasts 50 minutes with a 10-minute pause in between. English, contemporary Japanese literature, algebra, and physical education are among the subjects learned. Students typically resume their studies or go to work after graduation.

Exams need a minimum of 40 points to graduate. Students who miss their final exams are required to attend weekend supplemental classes and take a supplementary exam on each subject they failed; these can be conducted over the summer break. Supplementary tests have an 80-point passing score, and students must take them before they graduate.

The school’s Boys’ Volleyball Club was formed several years ago, and the school’s name has long been synonymous with crows. In reality, its banner reads “Go,” a reference to crows. During Karasuno’s glory days, it was reported that Coach Ukai had a fearsome pack of crows.

Karasuno, a former Miyagi powerhouse, has nine times represented the prefecture at the Spring High nationals. Coach Ukai and Tenma Udai, also known as the “Small Giant” (“Little Giant” in the anime) and well-known in Miyagi, were in charge of one of those occasions. Following its initial popularity, Karasuno struggled to pass its prefecture’s preliminary examinations in subsequent tournaments, earning the nicknames “The Fallen Champions” and “The Flightless Crows.” The team didn’t compete in nationals again for another five years.

Due to Ukai’s hospitalization after a few months of coaching the previous year, Karasuno went without a coach for a while. After that, Daichi Sawamura took over as captain and coach before Ukai’s grandson, Keishin Ukai, took over as the new coach. Kiyoko Shimizu, a third-year and the team’s original manager, and Hitoka Yachi, a first-year hired by Kiyoko during the first tournament, are the team’s coaches.

Daichi Sawamura, Asahi Azumane, Rynosuke Tanaka, Y Nishinoya, Shy Hinata, Tobio Kageyama, and Kei Tsukishima make up the main starting lineup. Karasuno is known for its fast attack (performed by Kageyama and Hinata) and its special members: Kageyama, the “King of the Court” at Kitagawa Daiichi Junior High, Nishinoya, the champion libero at Chidoriyama, and Hinata, the 164cm-tall middle blocker.

Aoba Johsai High, Date Tech High, and Shiratorizawa Academy are Karasuno’s biggest rivals in the Miyagi Prefecture. Nekoma High is the club’s “destined” foe, and Karasuno has always fallen to them. Their matches are known as the “Fight at the Garbage Dump” because their animal members (cat and crow) are normally located by the dumpster. (It’s known as ‘The Trashcan Showdown’ in the anime.)

The offensive strength of Karasuno is its best feature, with a heavy emphasis on attacks like the fast hit, pipe-line, and coordinated attacks using tempo. It also employs unusual strategies such as the Calculated One-Point Two-Setter, the skip float serve, and a libero toss to confuse opponents.

They defeated Shiratorizawa in the 2012 Miyagi Qualifiers Tournament and qualified to the Spring Nationals. After losing to Kamomedai, they were able to position among the top eight teams in Japan.

For the next two years, they will be able to participate in the Tournament twice in a row. They reached the Top 16 in 2014 after losing in Round 3 to Inarizaki. In 2015, they played Itachiyama in the Semifinals on center court and lost, finishing third nationally.

See more : All about Yu Nishinoya

All About Kei Tsukishima